Skip to content
By Thomas WilsonJuly 11, 2020ArticlesLeave a Comment on Probiotics and benefits for the intestinal flora

In recent years, an enormous number of scientific research has focused on the role of the intestine in human health. As in other areas of our health, science has also confirmed many ancient intuitions for the intestine.

Human beings have always perceived the “belly” as the seat of their emotional responses and in fact today we know well that the intestine is a sort of second brain, a tissue rich in nerves, closely connected with the central nervous system .

Furthermore, we know that the intestinal tract is the most active component of the immune system. But the most interesting area that research has highlighted in recent years is that of the bacteria that inhabit our intestines.

Not taking care of your intestines and the correct balance of the bacterial flora means exposing yourself to the risk of numerous imbalances including energy drops, gastrointestinal disorders, immunodeficiency, overweight and even an increased risk of complex diseases such as cardiometabolic ones.

This is why the intelligent use of probiotics can be of great help to health in a broad sense.

This term refers to live microorganisms that provide, when taken, health benefits through a rebalancing action of the intestinal bacterial flora.

The term lactic ferments is often used to define those bacteria that chemically transform lactose (the sugar present in milk) through an enzymatic process.

Probiotics are a specific category of lactic ferments.

The original research in this field was carried out by the Nobel laureate Metchnikoff who described the relationship between the consumption of yogurt in Bulgarian farmers and their longevity.

There is a close relationship between the foods we consume and the bacterial flora present in the intestine and this allows us to correct any endogenous imbalances by varying the food introduction.

The intestinal bacterial flora in fact contains strains of bacteria that promote health and others that instead damage it by increasing the inflammatory response.

Inattentive diet and an unregulated lifestyle negatively affect the relationship between healthy bacteria and pathogenic bacteria in a process known as dysbiosis .

Much depends on the consumption of fibers that contain substances such as inulin, called prebiotics, capable of stimulating the growth of healthy bacterial strains .

They are used to restore a correct balance in the intestinal bacterial flora and through this mechanism trigger a series of benefits at various levels.

Most of these actions occur due to the effect that probiotics have on strengthening the immune system.

The mechanisms of action at this level are many but in general it can be said that the healthy bacterial flora counteracts the proliferation of the pathogenic one which in turn feeds inflammatory processes that destabilize the immune system and make it less efficient in its protection action.

In fact, it is often forgotten that the gastrointestinal tract is not only responsible for digestion and absorption of food but is also the main organ of the immune system itself as it hosts over 60% of cells with immune action. / p>

For this reason there is also a close relationship between intestinal health and function and autoimmune diseases such as Hashimoto’s thyroiditis.

In fact, these are diseases that arise from a reaction of the immune system against a tissue of the organism itself.

When we expose ourselves to an unregulated diet for a long time, we generally lead an unhealthy life or are victims of excessive stress , the intestinal bacterial flora (i.e. the set of bacteria that harbors in the intestine), alters and harmful bacteria proliferate.

Antibiotic therapy can also have an overall negative effect as it kills both bad and good bacteria.

In these cases it may be useful to correct your nutrition and take probiotics to strengthen your endogenous bacterial flora.

There are no reliable scientific data to help determine the duration of a possible probiotic intake and whether it is functional for the purpose taking lactic ferments for long periods .

In most cases, the doctor monitors the clinical evolution and adapts the duration and dosage accordingly. In general, however, at least 2-4 weeks of continuous intake are necessary to restore an adequate balance of the intestinal flora.

The first choice is to include foods that either promote the development of healthy bacteria or that are rich in them. In the first case, fibers rich in prebiotics such as inulin which is found in many foods including oats, bananas, apples, kiwis, asparagus must be included.

In the second case you can instead take fermented foods rich in probiotics such as yogurt and kefir.

They can also be chosen of vegetable origin derived for example from soy yogurt, from water kefir, made with kefir grain and water or from tempeh and natto , also derived from fermented soy.

Many people are mistakenly convinced that probiotics contain lactose and therefore are to be avoided in those suffering from intolerance.

This is a false belief as lactose is a sugar found in milk but not in the bacteria it contains. The lactic ferments used as supplements are developed from cell cultures that do not involve the use of milk.

Even if derived from milk, even yogurt, which is very rich in lactic ferments, is generally well tolerated because it loses its lactose content through the fermentation process.

In people with celiac disease, not only can probiotics be used but even seem to have a protective effect.

Celiac disease is an autoimmune disease and probiotics exert a protective effect that reduces the inflammatory damage induced by the gliadin contained in gluten.

Probiotics, which ones to choose?

As with any supplement, the advice of a doctor or a trained pharmacist is also useful for probiotics.

In addition to understanding the clinical picture, the expert can recommend the product with the most suitable blend of strains. In some cases, probiotics can be used in association with specific fungi that fight pathogenic fungi such as candida. Saccaromyces Boulardii is an example of a healthy mushroom often associated with probiotics (source).

Surely this approach is more suitable than choosing randomly from the supermarket refrigerated counter. However, it is still useful to increase the intake of foods rich in probiotics such as yogurt.

One serving contains about 100-200 billion bacteria while a good pharmacy product contains 25-20 billion per capsule but obviously of specifically selected strains.

Another situation in which it is advisable to insert probiotics is after antibiotic treatments.

In fact, the therapy tends to have a negative effect on both good and bad bacteria and it is therefore advisable to strengthen the bacterial flora with a targeted intake in the period following the drug therapy itself.

In conclusion, research confirms that probiotics improve health and immune defenses and can be supportive in numerous clinical conditions.

Obviously these are not miraculous substances and in no way can they replace drug therapies prescribed by a doctor but can assist in maintaining health and managing certain clinical conditions.

Learning to improve your health through nutrition is important! Don’t waste any more time , start correcting the most common mistakes now! 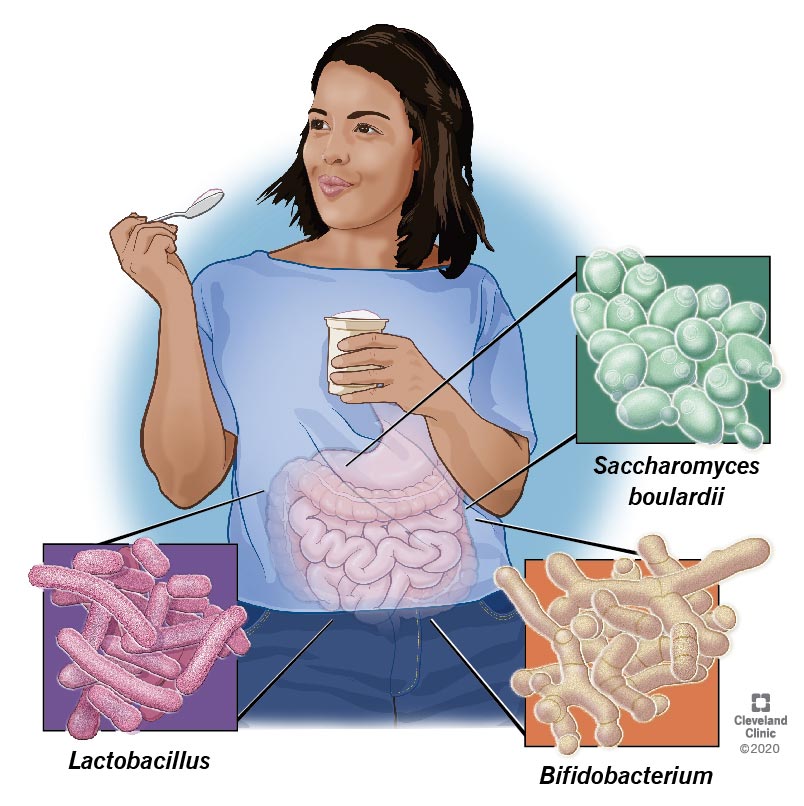