Have you ever heard of Omega 3s? I guess so, also because lately they are among the most discussed nutrients in newspapers and also in the scientific field. But what are Omega 3 for?

Well, they are important because they have a wide range of actions and functions in our organism, particularly at the metabolic level.

Want to know which ones?

Find out in today’s video, in which we will learn more about these nutrients and also discover the difference between those of animal origin and those of plant origin.

Omega 3s have a fundamental action in the management of many biochemical processes related to inflammation.

Their intake can be very useful, for example, to alleviate inflammation of the blood vessels and to help us in case of inflammations affecting the nervous tissue and which can lead to neurodegenerative diseases.

In short, we need to keep the level of these nutrients constant in our bodies, following a healthy and balanced diet and above all learning to distinguish the various types present in foods.

You want to find out how to get enough Omega 3 and understand the differences between the various types. Here is an interesting article I took from an old video, updated for 2020.

Omega 3 are among the most discussed nutrients in science and beyond, you read about them in the newspapers and people talk about them a lot because actually for many years there have been data in scientific literature that show that omega 3 can be a help in a whole series of actions in the organism on the metabolic level.

I say help because I would not come to use the term “therapy” because as often happens with natural substances and nutritional substances, the power of action is not such as to effectively define them as therapies. there are so many data that indicate that they have a fundamental action in the management of many biochemical processes related to inflammation.

Inflammation is one of those natural, essential processes that has played a fundamental role in our evolution in helping us overcome infections and heal wounds. In the most modern era, however, instead of functioning as an acute on and off mechanism, it tends to become chronic and becoming a kind of small fire that wears out and alters the tissues, so much so that we speak of systemic inflammation, therefore, when I use this term, I am not referring so much to “I have pain in my elbow” so there is inflammation, but that inflammation that exists at the level, for example, of the vessels and which then leads over time to cardiocirculatory problems, that inflammation that occurs in the adipose tissue and over time leads to the production of endocrine substances that are not favorable, the inflammation that can even occur in the nervous tissue and then over time give rise to neurodegenerative diseases.

Here is this chronic inflammation is not good for us and depends on many factors, but a trigger and absolutely decisive factor is our eating style, that is, eating badly and too much and being exposed to a very refined diet and often also rich in fats that they are not so particularly “biocompatible”, here the tendency to inflammation is exasperated and increases.

So this protective action of Omega-3 is really exerted at 360 degrees from the brain to the bones, passing through substantially all the tissues of our body.

Here, however, not all omega 3s are the same and since in recent years the debate among vegans has spread and instead people who remain omnivorous philosophy as I am, Omega 3s have been taken into this dialogue, sometimes very heated, and therefore we arrived at a comparison between the category of Omega 3 contained in plant-based foods and the Omega 3 contained in animal foods.

Now, I want to clarify something, they’re all Omega 3s, but they’re not the same, absolutely. Foods of plant origin contain alpha-linolenic acid which is a precursor of the important omega-3, which are instead the eicoisapentaenoic and docosahexaenoic acid, EPA and DHA in abbreviation, which are actually those that give the important modulation action inflammation.

So the fact that I have taken a plant-based Omega 3 does not give me a guarantee that I will actually increase the presence in my body of EPA and DHA. Why this? Because the precursor can undoubtedly be transformed into EPA and DHA, but this requires a whole series of enzymatic steps that are by no means guaranteed to work ideally.

But there is another theme here .. and that is that the breeding method affects the presence of these fats inside the animal. So much so that it is said that, for example, beef contains low amounts of Omega 3, well unfortunately this is true when the meat is farmed. When the meat comes from grazing animals, this does not happen and the omega-3 levels are significantly higher.

So even here there is this aspect to keep in mind and this is especially important for those people who say “I don’t want to take a supplement, I prefer to eat Omega 3 with foods.” food contain them.

In my opinion the most practical and effective solution is that the omega-3s are integrated by basically choosing between the forms that guarantee a high concentration of EPA and DHA which are the ones that matter, so not so much flaxseed or l flaxseed oil, as well as fish oil, krill oil or algae extracts. In this case, the concentration of EPA and DHA is sufficient to actually arouse this modulation of the inflammatory response in the organism.

This clearly must be inserted as always in the context of a correct diet, because it is good to always remember that any form of nutraceutical supplementation makes little sense if you continue to make mistakes.

So if the mistake has been corrected and the person is actually eating well, the extra omega-3 intake can make a difference in terms of prevention.

So the first step remains to remove the errors and an important mistake in this case is the intake of too many omega-6s which have a predominantly pro-inflammatory action. Omega 6 are very present in industrial foods rich for example in sunflower oil and also in the type of diet of a person who eats an excess of farmed meat in which the quantity of omega 6 is certainly prevalent.

Hence the importance of Omega 3, but knowing how to choose the right versions and also, first of all, correcting the errors we have in our diet.

If you are interested in the scientific basis of food supplementation, watch my video course for free Discover nutraceuticals. 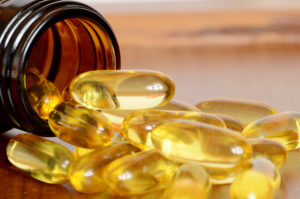